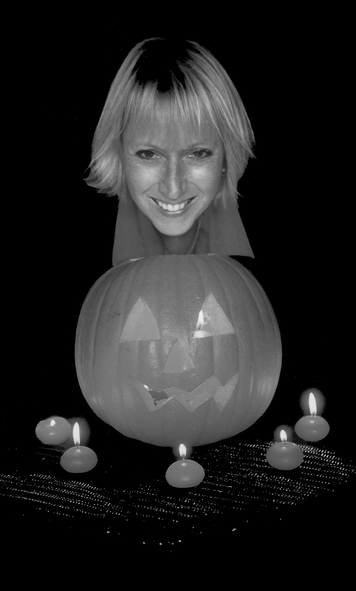 She devised the popular Island Ghost Walks, a series of historical walks with a supernatural slant, which have introduced thousands of Islanders and visitors to the darker side of towns such as Newport and Cowes.

Although not psychic herself, as a journalist who is also a member of the Ghost Club Society, Gay has interviewed many hundreds of people who have incredible and inexplicable experiences of hauntings. Armed with the facts, she then researches the history of the sites or houses involved, looking for reasons for the ghostly happenings.

Some accounts defy rational explanation and this fifth book of Isle of Wight ghost stories will give even the most confirmed sceptic pause for thought.

Some of the things that go bump in the night are easily explained away. An over-active imagination can conjure up all sorts of "ghostly" sounds, smells and apparitions. Creaking timbers; skeletal branches tap tapping on window panes; owls or bats in flight after dark; mice or rats scurrying through attics or behind walls, can be the innocent origin of many a ghost story. Not in every case however....

After more than forty years of writing about ghosts, Gay firmly believes in the supernatural. Too many people, reasonable, rational, sensible people, have had experiences and encounters, which cannot be explained away by anything other than supernatural means.

"These books are like a drug, once you pick them up you cannot put them down. I need my fix please can you let me know when the next book is ready."

Gay Baldwin, who has helped with local research for Living TV's Most Haunted series, and advised on other supernatural television and radio programmes, is recognised as one of the leading paranormal researchers in the UK. As a member of the Ghost Club Society and member of the Society for Psychical Research, she has investigated and researched many hundreds of ghost sightings and reported hauntings.

Where it all Started...

My name is Gay Baldwin and I write ghost stories
For the past 40 plus years I have been recording and researching ghost
stories on the Isle of Wight, Ghost Island – the world’s Most Haunted
Island. This may seem a rather eccentric thing to do, but its a way to
meet some rather unusual people and a good way to get invited into some
interesting houses.

I have so far written eight books on local hauntings, many hundreds of
stories in all, I devised the Newport Ghostwalk and later launched several walks and
tours, and the popular overnight investigations with the Isle of Wight
Ghost Experience founder and leader Marc Tuckey.

Writing about ghosts is not something I ever set out to do. Like most
things in this life, it happened accidentally. I have been a journalist for 40
years this year, and it was back in 1975 when I was a young reporter at
the County Press, that I wrote a Christmas feature on ghosts at
Billingham Manor, which is haunted by a number of different spirits,
including the head of King Charles I, which would appear when a
prisoner was executed at nearby Parkhurst Prison.

This feature went down rather well, and people wrote in to the newspaper
with other ghost stories from around the island. The idea of writing a
book was born in a bar one lunch-time, when a fellow journalist Ray
Anker, a sub editor on the paper, suggested we should collect a few more
stories and write a book - as it had never been done before. There was
Abraham Elder’s Lays and Legends of the Isle of Wight, Shane Leslie’s
account of the Billingham Manor ghosts, and Ethel C Hargrove’s assorted
tales, but nothing devoted just to ghost stories.

We finally got round to starting work on it the following spring, and the
original Ghosts of the Isle of Wight came out in time for Christmas 1977.
Unsure of how many we would sell - we put up the money and published
it ourselves. We had 1,000 printed. These sold at £1 and were snapped up
in just three weeks. So if anyone has an original first edition, signed by
both if is, it is a rarity indeed.

The world's most haunted island.